Below are the zone wide season limits. Click 2019-fmz-18-english.pdf 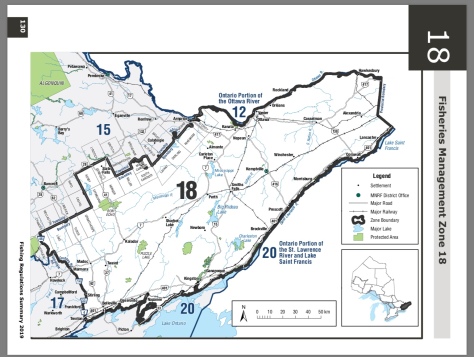 Season: fourth Saturday in May to September 8

Separated from the larger, northern lobe of what was once one lake by construction of the Rideau Canal, picturesque Upper Rideau Lake marks the height of the watershed. The lake is known for its smallmouth and largemouth bass fishing, though lake trout, pike, yellow perch and walleye are also plentiful. Pan fish are also present, including crappie, pumpkinseed, bluegill and lots of rock bass. https://www.anglersatlas.com/place/102515/upper-rideau-lake

Upper Rideau Lake is a shallow meso-eutrophic lake that supports a diversity of mainly warm water and cool water fish communities. The lake is currently managed primarily for Walleye, a fish species which is not native to Upper Rideau Lake.
The objective of this study was twofold: to assess the status of the lake’s Walleye, Yellow Perch and Northern Pike populations using the standardized Fall Walleye Index Netting (FWIN) methodology (Morgan, 2002); and to determine Walleye recruitment rates, which had been presumed as being low based on the lack of smaller-sized mature fish showing up at the main spawning sites in Westport, over the last several years (Westport and Area Outdoor Association Spawning Observation/Collection Reports 2013 Upper Rideau Lake Walleye FWIN Report Final (Aug. 2015)

The Ministry of Natural Resources and Forestry has determined that there is very little, if any, Walleye (Pickerel) population recruitment occurring (i.e. no longer producing any new generations of fish) in Upper Rideau Lake.  The main reason for this is probably due to competition/predation from large populations of bass, Yellow Perch and panfish (sunfish, Black Crappie, Rock Bass) which are eating the young Walleye before they have a chance to become adult.  There are two options being proposed for this problem.  One is to do nothing and allow the lake to remain a bass, Yellow Perch, panfish and Northern Pike fishery.  The other is to try to rehabilitate the lake’s Walleye fishery as this species is what most sport fisherman want to catch.   This would be accomplished by encouraging more recreational harvest of these competing fish species, as well as allowing the commercial fisherman to remove a proportion of the bass, and an increased proportion of the Yellow Perch and panfish from the lake over a number of years.  The MNRF would then then stock the lake with Walleye fingerlings in the hope that they will be able to survive and grow to adulthood with their competitors/predators reduced.

Ontario hunting regulations summary This annual hunting guide summarizes the rules and regulations for hunting in Ontario. It provides information about hunting licences and fees, as well as up-to-date regulations and seasons for each game species. Upper Rideau Lake is in wildlife management area WMU 67.

Connect with us on Social Media